Story Time: Dealing With a Health Issue While Traveling 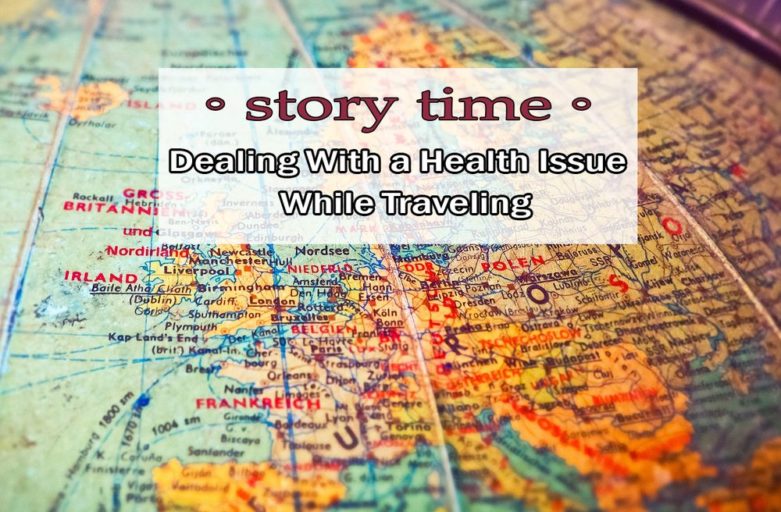 Travel is supposed to be all fun and games, but sometimes, things go wrong. Literally, anything can happen, from losing your possessions or being a victim of scams to getting sick and the list of disasters can go on and on. Because I get to travel a lot, over the years I got my fair share of problems down the road. While there are some happenings that can be avoided if you know what to expect, some don’t fall under your control, but the outcome will reside in the way you manage them. For example, having a sudden medical problem is mostly unavoidable, but knowing what to do in case this happens can make the difference between a ruined vacation and a fun vacation with a little unfortunate incident. And of course, I have a story on this topic.

A couple of years ago I planned my first trip to Germany with Gabi, my longtime friend. When the big day arrived, our plan was simple. Wake up, go to work, go home, take our backpacks, go to the airport and start what was supposed to be an amazing week. But one little thing went differently that day. When I woke up in the morning, I had a slight feeling of having sand in one of my eyes. Of course, I did what adults do, which is suck it up and ignore it, hoping it would go away. It didn’t. If all, staying at work all day looking at big computer screens only made it worse.

I started to recognize the symptoms. All of them were pointing towards pink eye, aka conjunctivitis. I’ve had the eye condition a few times before and I knew I had a sensibility for it, but what were the chances of getting it again precisely when I was about to go on vacation? Slim, but slim does not mean null. I knew I wouldn’t have time to go to a doctor after work, but going to a pharmacy seemed like an equally good idea. The lady that was at the counter saw my red, swollen eye and gave me three different mini-bottles of eye drops. In my mind, the problem was now solved.

At the end of a tiring day, my friend and I arrived in Berlin. For some reason, we spent the whole night roaming the streets until morning. That’s another story, but I’ll leave it for another time. The bottom line is that I put a lot of pressure on my eyes that night, in order to stay awake.

Anyway, the next day we went to our hostel, I put the eye drops and then slept until evening. When I woke up, my left eye was completely closed. Because my eyelids were glued together, I had to wash my face several times in order to get back my full vision. Then, I put eye drops again, but I just had a feeling they won’t do much at this point. Therefore, I started to consider other options.

The first thing that popped into my head was to go to the emergency room of a hospital, but here’s the thing. Until then, I never had a medical problem while traveling abroad, so I had no idea how the system works for a traveler who needs medical care in a foreign country. Even if I live in Romania, a member of the EU, and I was visiting a country that is also a part of the EU space, I was pretty sure I would still need some kind of medical insurance to get any kind of free services in a hospital.

For fear I could be put in the position of paying what I can not afford, I decided to just go to a pharmacy, and ask for a piece of advice. Maybe better medication too, if it was the case. I just had to make sure I survived a few more days until I got back home.

I entered the first pharmacy I could find. Although there was a bit of a language barrier situation going on between me and the lady there, I managed to tell her what was happening to me, when the symptoms began and what medication I’ve been taking so far. She said that my medication is correct in case of conjunctivitis and that she wouldn’t recommend anything different. Thinking that my best option was to keep trying something that has already proven to have little to no results left me discouraged.

The next days were pure torment. My left eye was red, watery, itchy and half closed constantly, despite the fact that I was respecting religiously the schedule for using eye drops. Being outside all day in cold and windy weather didn’t help either. Besides making me feel uncomfortable, my pink eye also ruined all my vacation selfies, as you can see below.

Long story short, I had no other option than to wait patiently for the week to end. On the last day, after the plane landed, I didn’t even think about going home to take a long, relaxing bath, like I usually do. My first stop was the hospital. After being recommended another type of treatment, my eye got better quickly.

After the whole thing passed, I started to dig a little deeper about what medical care is all about while being in a foreign country as a traveler. What I found out was pretty amazing. Listen closely. If you live in a country that is a member of the EU and face a health problem during a temporary stay in another EU country, you receive medical treatment the same way a permanent insured resident would. The only thing you have to do is request a free European Health Insurance Card (or EHIC) while you are still in your home country. The is a little catch though: Having the same rights as a resident of the country you’re in does not guarantee that all the services you receive will be free. Each country has its own health system, therefore a certain service that is free in your country might not be in another.

Also, there are a few rules that limit the use of this card. For example, it doesn’t cover the costs if the purpose of your trip to that country is to get medical care or treatment. I’ll soon make an article solely dedicated to the importance of health insurance, including the benefits and restraints of the European Health Insurance Card. I’m sure that many people, including frequent travelers, don’t know about it and I think it would help them avoid unnecessary sufferings due to health issues. Also, it’s important to know that EHIC does not replace entirely paid travel health insurance. Stay tuned for the upcoming article to read an extended comparison between the two.

Whenever I tell this story I like to joke about how for most of the people traveling is an eye-opening experience, but there was that time when for me it was quite the opposite: an eye-closing experience. Pun intended, haha!

That’s it for now, I hope this lil’ chit-chat was convincing enough for you to take precautions when traveling because unexpected problems are always prone to show up and ruin your vacation. Now, what about you? Do you have similar stories? Or have you been lucky enough so far to be spared of such sufferings? Hit the comments section down below to leave your thoughts!

It is very sad that you had a medical issue while traveling. It becomes very difficult to handle a medical issue in an unknown land. I think all should get medical travel insurance for all safety.

Sorry to know what you had been through. It is really inconvenient when you fall sick while traveling. However, glad you got better now and the most interesting thing I got to learn from your blog is about the EHIC. It is a bit tricky but always good to know about medical care.

Sorry to hear about your experience, it is not pleasant to fall sick on a trip and honestly, most of us don’t know what exactly the right procedure would be to get treatment if that were to happen. I always get travel medical insurance before travelling but I never actually looked into how exactly to benefit from it either, should that need pop up someday (although I hope it doesn’t!).

That’s really bad experience. Sorry that you couldnt fully enjoy the trip. But your are right, everything can happen when we travel it cannot be rainbows and unicorns all the time, that’s sadly not possible.

Yup, all we can do is learn how to prevent some of the bad things that can happen and hope for the best :)

Ahh, that’s so awful. I had the same thing happen to me many years ago while visiting Hawaii. I woke up with pink eye after our first night there. I ended up visiting a local clinic and was able to get it taken care of quickly, but it sure was terrible timing. Fortunately, I was in the US, so I was familiar with the medical care system. Not sure how I would have handled that if I had been out of the country. Makes for a great story though!

You were lucky to have it taken care of so quickly :)

I had food poisoning during a long term backpacking trip and after that I started keeping the numbers of medical emergency so that I can find help at unknown places. Thanks for your tips

It must have been awful :( I’m sorry you had to go through that, but it’s something that can happen anytime, to anyone and it’s good to know that you are now prepared for such unexpected medical problems.

Really sorry to hear about the painful eye condition you had to go through during your trip. Until reading your post, I wasn’t even aware of the EHIC and the fact that we can apply for it from the home country before traveling to any of the EU countries. Thank you for such an informative post and I look forward to reading your next post regarding more details and restraints of EHIC.

Really hope that the information will help you and other travelers in the future. We all need to take care of our health so we can fully enjoy the new experiences :)

OMG, I still remember that trip. As awesome as it was, it was really fun that runner eye of yours. Maybe next time we get to Berlin we resume ourselves only to the Finnish wine, without the eye haha.

Hehe, remember when you had to pour eye drops in my eye in that bus stop in Potsdam, because I couldn’t stand the itch any longer? I guess you’re right, it’s really funny now that I’m looking back. And btw, we should really get back to that Finnish mulled wine, it was awesome!

You can find the Palm House in the #Gardens of #Sc