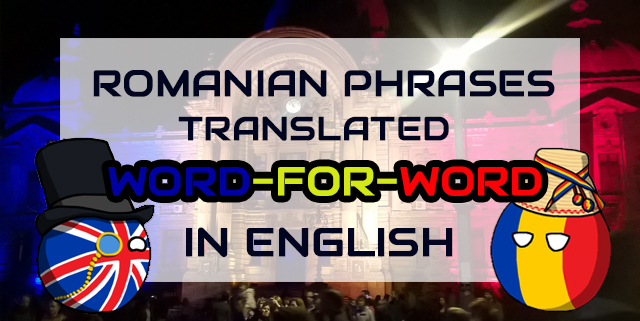 Romanian language is a never ending pool of idioms and popular phrases. This nation will never cease to amaze me when it comes to its creative capacity and secular wisdom that is reflected by Romanian’s way to speak. Talking with the people that live in the rural areas of the country made me burst into laughter so many times, just for this reason. Then I thought, what would it be if some expressions were translated in English… word-for-word? Well, see it for yourself.

This is very similar with the English phrase “gone down the drain” and it means that something is lost, ruined or destroyed. The funny thing is that I’ve used this expression my whole life but until recently I didn’t know that “Apa Sâmbetei” really means something specific. In Romanian mythology, this was a river of fire that surrounded the Earth and flowed into Hell. According to the legends, anything that fell in this river, was hopelessly lost.

“Get lost!” No, not you. You are more than welcome here *fluttering eyelashes*. I meant this is what “Plimbă ursul” means. Again, English has a fairly similar structure: “Take a walk!”. But here in Romania we have lots of bears, so it would be a shame if we didn’t include them in our plans.

This phrase is used to describe useless actions. The expression started as a reference to those who were poor and didn’t have any animals other than dogs (in the past almost every Romanian household had dogs, regardless of the social status). While those who had sheep, goats or cows had to cut them grass and leafs for them to eat, those who owned only dogs didn’t have to perform this action, because it was useless. Simple as that.

I didn’t find any kind of solid information about the origins of this expression, but I did find some info about the Manchurian glue that could explain it. As you might know, Manchuria is a region in Northeast Asia. Although the exact limits of the region are subject to controversy, most agree that a significant part of Manchuria lies on Mongolian territories. From ancient times, the Mongols were known for their affinity for war, and one of their favorite weapons was the bow. The different parts of the weapon were bound together with animal glue, that is pretty easily dissolved by water. So as you can imagine, in humid conditions their bows were literally falling apart. Moral of the story: their glue wasn’t very efficient, and that is exactly what “Clei de Manciuria” implies.

If I’m honest, this expression actually sounds better in English, because it resembles a word play. This expression means that something is not done right or something doesn’t fit somewhere. Imagine you throw a walnut into a wall and you want it to stick. It won’t. Don’t ask me how this phrase was created. It’s a mystery for everyone, myself included.

I actually giggle everytime I hear this saying. Even though is used in a pejorative sense, I have to admit it’s funny as hell. You can say this about someone who was unable to learn or understand something. Admit it. You are now trying to remember this one for… reasons.

Ca Voda prin lobodă – Like the king through pig weed

This phrase is usually used as: “to walk like the king through pig weed”. In Romanian it sounds funny because it rhymes and the meaning is roughly “to walk untroubled”. There is also an antithesis between the king and the pig weed. The first one is mighty and important, while the pig weed is a non-significant plant. What’s interesting is that the origin of the phrase has some controversy around it. There are two versions that I’ve heard of, and what’s even more interesting, is that none of them has anything to do with pig weed. Apparently it was all about some misheard words and linguistic transformations. So many people become famous for nothing or by mistake. Why couldn’t it be the case of pig weed too?

So that’s all for now. Whether you’re interested in Romanian language, linguistics in general or you just came here to have a laugh, I hope you enjoyed reading this as much as I enjoyed writing it. What similar phrases do you know or have in your language? Hit me with your best stuff in the comments below!

I’ve been surfing online more than 4 hours today, yet I never found any interesting article like yours. It is pretty worth enough for me. In my opinion, if all web owners and bloggers made good content as you did, the net will be much more useful than ever before.

What a great and interesting post! Love these kind of posts!

Very interesting. It is fun understanding local phrases. The river of fire sounds similar to the Styx from Greek Mythology. And please do elaborate about carrot in your ass…ha ha .

You forgot about having your carrot in your ass. :))