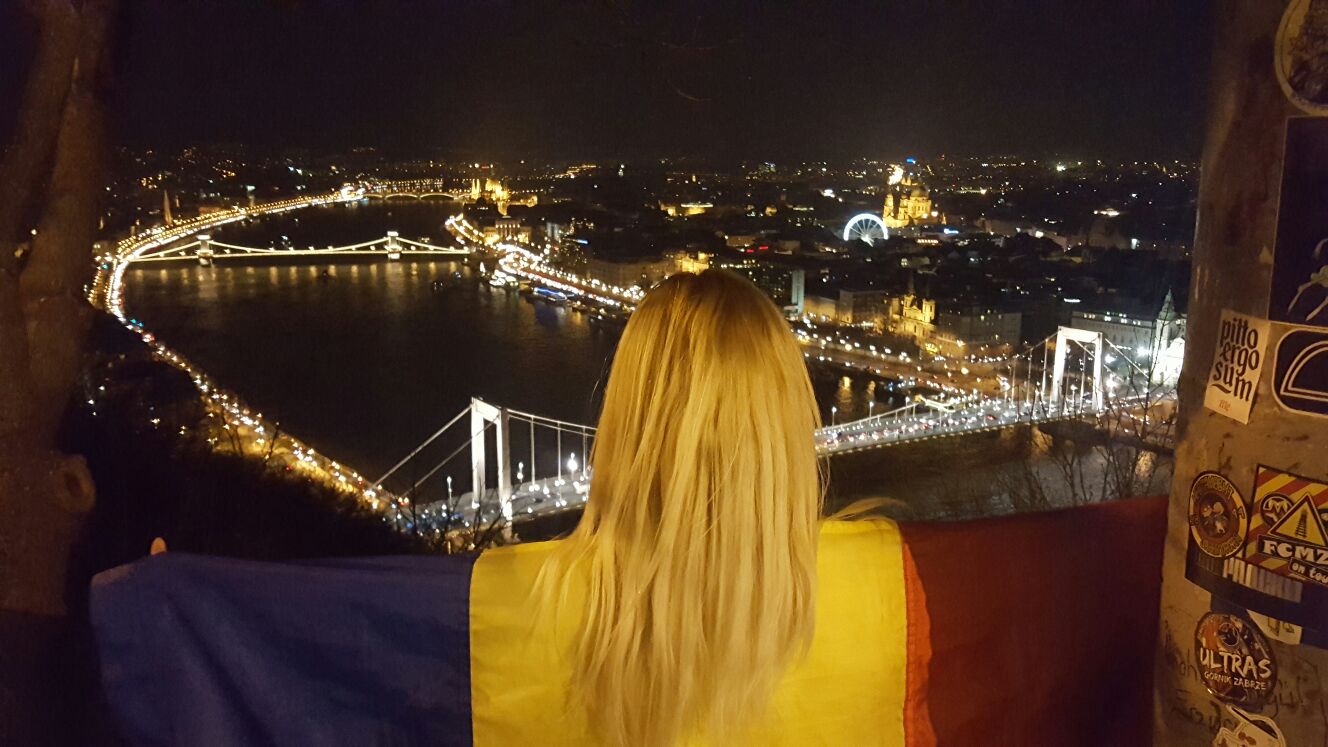 Recently I told you a story from 5 years ago about fighting my fears and traveling solo to another city for a music festival. That was an important milestone for me because it marked the moment I earned my first solo travel badge. Since then, I became more and more confident to have other small getaways in all corners of the country. So confident that one day the idea of going on my first international solo trip popped into my head and irremediably sticked with me.

I didn’t put much thought into choosing my destination. I just found a great deal on plane tickets to a city that I really wanted to see in a long time and I bought them. That was it. From the first moment it felt right. It felt like it was time to try going somewhere solo. And everything was all sunshine and rainbows up until I set foot for the first time in Budapest. Then I started to freak out.

While planning the trip, my main concern was the language barrier. My country has a large Hungarian minority, but my knowledge of the language is mainly limited to Nem tudom magyar, which translates to I can’t speak Hungarian (oh, the irony). Well, I also know a short poem, but because it has some bad words, I imagined it wouldn’t have any usefulness in everyday conversations. Anyway, I had my hopes up that I would be just fine with speaking English. Needless to say my dreams were shattered multiple times within my first hour there.

After I landed in Budapest I had to take the bus 200E, which connects Terminal 2 to Kőbánya-Kispest metro station. I found it in a matter of seconds without any help, but when I reached the end of its route I felt a little lost and I asked someone for directions to get to the metro station. Did a say someone? Make it several someones. And all answered me with a shrug and a lost look on their faces. Rough translation of all that: Lady, I don’t know who you are and what you want from me because I don’t speak English.

So far my plan was unsuccessful and I understood pretty quickly that it will probably won’t lead anywhere in the near future. My solution? Trying to frantically decipher the weird writings on the walls and on various signs. I felt like Champollion on a smaller scale. Of course it didn’t help either, but intuition did. When I finally walked in the subway, I had a huge smile on my face and I felt the urge to do a dance of victory. I was actually considering it, when I realised the group of three people in front of me was speaking my language. Imagine my excitement. I felt no longer alone. In an instant, I took a seat next to them and said hello. Then, the usual questions followed: What are you doing here? Where are you staying? For how long? During the conversation, I found out that one of them was a solo traveler as well and didn’t know the other two. Five minutes later, we were already making plans to explore the city together.

And so we did. After two days we knew each other like old friends. We also made other friends there and I just want to say that it was amazing to connect with like minded people. I felt free to be myself. No hiding, no faking. We were the same. We shared stories about places on Earth that made our heart beat faster. We told stories about the people we met on the road over time. We laughed. We mingled with locals and tried new food and drinks. We took long strolls on Budapest’s bridges, looking in the distance as the sunset embraced the calm waves of the Danube.

We climbed to the top of the Gellért Hill watched the city unfold in front of our eyes. We dreamed with our eyes open and shared our plans to take over the planet. Not with guns, but with our passports and love for the people.

To be honest, before this experience, I have read lots of articles about solo travel. Most of them described wonderful experiences and were full of positive, encouraging, touching words for those who were scared to take the leap. Like me. And don’t get me wrong, it’s not like I didn’t believe that this type of experience can have a good outcome, but I didn’t think that someday this will be my story too. I thought this whole solo travel thing will be just an act of bravery and nothing more. I wanted so much to check it off my list and to prove myself that I can overcome my fears. Did I think that I would probably do it again after? Yes, but only because I think that finding people to travel with shouldn’t come in between me and the thing I’m most passionate about. Who knew that I could really enjoy getting out of my comfort zone and that I could get addicted to it? Somehow it happened though. And now I’m looking forward to my next adventure, with a big smile on my face. And you know what? Even if you are in doubt right now, you should do the same. It’s worth it.

Solo trips are the best – I’m glad you took the leap and had such an awesome experience!

Life of a TravelBug

I am glad that you mentioned the first part of being lost and confused! The best part of solo travel is overcoming this feeling and having an amazing trip! I am glad you had a good time and I wish you many more exciting solo travels!

Awww. I had my first solo travel in thailand. I had my share of ups and downs. But im so glad i did it. I loved it ever since. Cheers to more solo traveling on your way!

Hi Elena! I lol when read you know that poem for bad word. hahaha…funny.Glad you break your fear. Solo travel..one just need the first move and you will fly all the way.

One and Half backpacks

I am so happy for you that you decided to do it on your own. I always find it hard to find some one to travel with, so it should not stop you to explore the world, I hope there is many more trips and adventures for you in a future :)

Very inspiring :) Glad you took the plunge and had fun!

I always wanted to experience a travel solo experience. To feel that I’m not depending anyone or anything! Good for you!

Im glad you were able to step out of your comfort zone and see the world solo! Good for you girl!

So glad you had a great experience! I agree that travel should not be dependent on who you can talk into going with you.

Hang Around The World

This is an amazing experience, thank you for sharing this! I usually travel with my family or my friends but I’d like to do the same. Inspired! – Amalia

Traveling solo to foreign countries requires expertise in playing charades. Also, it helps to learn at least a few phrases in the local language–I always learn to say “hello,” “thank you,” and “beer.” Sometimes I learn to say, “Do you speak English?”

Now that you’ve done your first solo international trip, I’m sure that you will be hungry for more