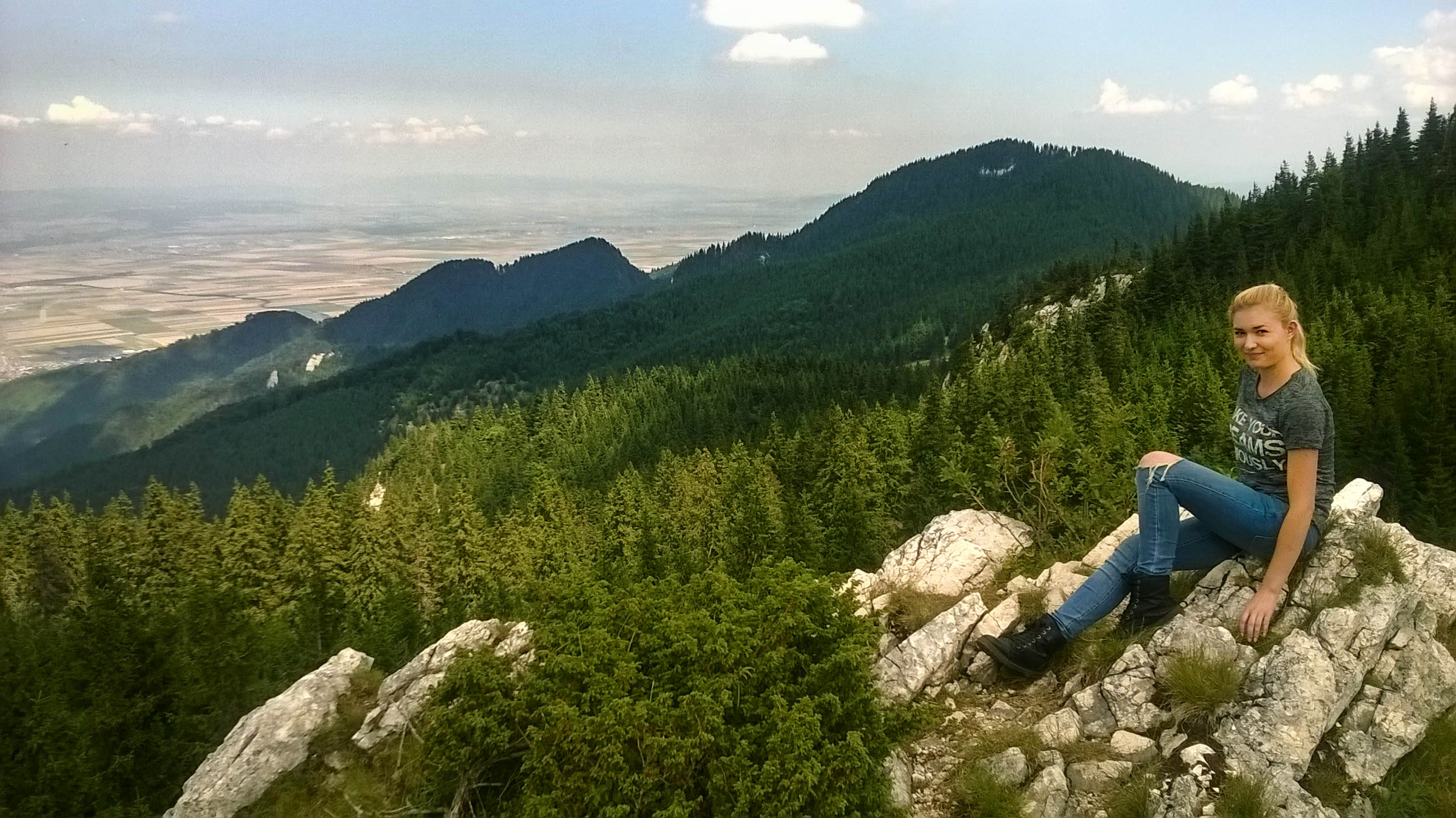 Piatra Mare Massif is located south of the Brasov Depression. It’s well known in Romania for it’s many tourist trails, steep slopes and perfect spots for panoramic views. It’s highest peak, also called Piatra Mare, is 1843m. Reaching it is not really a walk in the park, it requires time and effort, but I guarantee that in the end it’s all worthed.

To start your quest to conquer Piatra Mare Peak, you first need to cross the Seven Ladders Canyon and then follow the trail marked with yellow and white stripes.

You’ll have to walk through the forest for about 5 hours, but there will be so much going on in your surroundings, that you can’t get bored. You’ll see small streams with cold, fresh water, joyful birds in the trees and delicate flowers on the ground.

Be prepared for when you reach the top, that’s when the real magic begins. You’ll find yourself standing on a beautiful arctic plateau, with a wide view of the city Brasov.

On the same plateau, there is a wooden chalet (Piatra Mare Chalet), where you can find accommodation and a hot meal. The surrounding meadow is populated with some very friendly donkeys, that are strolling without care among people.

After you rest for a while in this fairytale scenery, you can really conquer Piatra Mare Peak. Be careful though, getting to the very top can be a little challenging.

Now, for the way back I recommend another trail, that is secretly hiding one of the best views I’ve seen so far. First, you have to find the white and red trail marking, and start to follow it.

At one point you’ll see that the paths are splitting and a sign will notify this with a trail map. Now look around for another trail marking: a white and blue triangle.

Follow it until you reach a dead-end cliff. This is called The Bear’s Chasm. It’s a place of extreme beauty, I could stay for hours just staring at the steep walls of rock and admiring the heights.

To be fully honest, standing here, at the very edge of this abyss, I could only think about how all my actions so far led me to this moment. It was something I’ve never experienced before at this level. My heart was racing, my legs were shaking, but my mind was frozen observing the greatness of what nature can make.

Now return on the old path, and keep following the white and red trail marking, until you reach the Seven Ladders Cabin. If you have the time and you are still feeling adventurous, you can go all the way down on a series of zip lines.

You have now reached the end of the day. It’s time for a cup of hot tea and a good night’s sleep :)

Are you a fan of exploring new mountain trails? What do you think about this one day getaway? Tell me all about it in the comment section below!

Hello. So nice to know more about Romania. Here in Portugal we don´t usually hear about the country attractions. This place looks amazing.

It’s beautiful there! How does it look like in winter? Have you done the trail in winter?

I haven’t done it in winter, but I would love to. Actually, today I’ve spoken with somebody that went there in winter and said that it’s beautiful, but also much, much more challenging. You need safety equipment and some other special preparations :)

Looks to be an absolutely gorgeous part of the world although if I’m honest, I would have always associated these kind of views with places like Austria more than Romania. Nevertheless, you’ve done a great job capturing the grandeur of the place but that last picture of you looking over Bear Chasm really isn’t good for my vertigo, even on my laptop. Great post and even better photos.

Romania has lots of beautiful places and stunning views, but they are not well promoted. Austria definitely does a better job at building the image of a great tourist destination :)

I had never heard of this peak but it sounds like a great day trip! Thanks for sharing and I love your pictures!

Thank you so much for the feedback :)

Enjoyed hearing about your fun day out in nature. And thanks for letting us know at the beginning of your post where this area is located. Would have never known otherwise. Nice photos and narrative.

whoa, Bear Chasm would be where I would want to go! Awesome shots! So I know you took a day trip on the 7 stairs to get here is this all possible to do in one day with this? are you allowed to camp there too?

Yes, both trekking The Seven Ladders Canyon and reaching Piatra Mare Peak can be done in the same day. From what I know there aren’t camping sites on the mountain, but at Piatra Mare Chalet you can stay overnight for around 6,5 euro/night (30 lei). Hope this helps :)

amazing photos and such a beautiful place..love the little marks you need to follow xo

These seems like such an interesting and mesmerising hike! Thanks for sharing, I’ll definitely keep this walk in my mind!

Glad you liked it! Thank you for being here :)

Yes, the views were truly stunning!

This is just amazing. I’ve been on some mountains like Tara, Zlatibor, Rtanj, Ozren and I must say that those experiences really change you. The best part in enjoying the fresh air since nowadays that’s something rare in the big cities.

I agree! After two weeks in the city I feel the need to get a breath of fresh air. Also, thanks for sharing the places you’ve been. I am currently making a list of mountains to climb, so I’ll keep them in mind :)

What amazing views on that walk. You were very brave as I don’t think I would have got that close to the edge of Bear Chasm!! How lovely to see all those donkeys just wandering around :)

Considering that I have a slight fear of heights, I must admit that I had to gather some courage to get so close to the edge. But I did, and it was an amazing experience! As for the donkeys, I loved them! They were so cute, friendly and playful :)

What a beautiful peak! I’m scared of heights so I could never complete such a feat!

You don’t have to get to the very top if you’re scared of heights, but still, you should try to conquer the fear!

Great photos. It seems like a serene and beautiful place. I haven’t really hiked anywhere but I’m willing to give it a shot especially when I see photos like yours :)

You should! It’s so much fun and a very rewarding experience :)

Wow that park looks so amazing! :-) sounds like it’s perfect for ones who wants to get close to nature :)

It is perfect! Adrenaline, great views and fresh air. What else can I wish for? :)