Story Time: How I almost attacked a priest. In Rome. Inside a church. 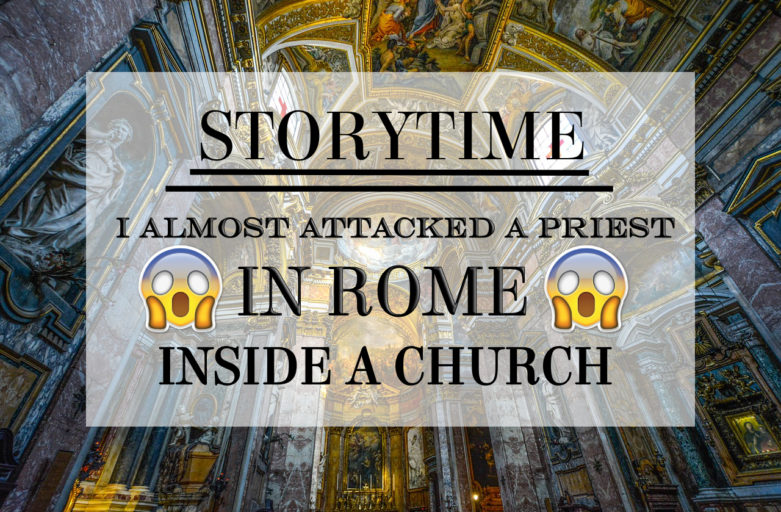 When people find out that I travel a lot, they often ask for stories. Some want to know about people that I met along the way. Others want to hear a funny tale or a dangerous, weird or unexpected situation in which I found myself in at some point. Because I have a ton of stories of each and every type, I usually find myself ranting about them for a long time. At the end a lot of people ask: Why do you keep these stories for yourself? Why don’t you write these down on your blog? After a while I realized their question was valid. Isn’t that the purpose of having a blog? Sharing experiences with the world?

And this is how the Story-time section was born. This particular story that I’m sharing today was a scary experience, but now I’m laughing every time I remember how blind and dumb I was in that day.

All happened while I was visiting Rome for the first time. Since it was one of my dreams to get there, I was enjoying every moment, marveling at its extraordinary diversity, strolling the streets without aim, discovering works of art scattered all around the city, admiring the architecture, stuffing my face with pizza and ice cream. You get the point. Rome is that kind of city where you can leave fate lead the way because you will find amazing things literally at every turn.

To start my story with a fun fact, Rome has over 900 churches. Wherever I’m going, I visit a decent amount of places of worship, because although I’m not a religious person, I’m fascinated by their architecture.

One day, I found an interesting looking church (I really can’t recall its name though) and in a heartbeat I decided to go in. At the entrance there was a security check up, similar to those from airports. On the left side there was a roller conveyor, where you would put whatever items you had on yourself (jacket or bag or metal objects), in order to get them through a scanner. On the right side there was a walk through scanner for people.

The waiting queue was long enough to make me stare at the person in front of me for a fair amount of time. He was a young priest, looking sharp in his clerical clothes. He seemed to be a bit nervous and impatient, but nothing too worrying. The line shrunk until it was his turn to pass the security. With quick gestures, the priest put something on the conveyor and because I was next, I also put down my jacket and phone.

After he passed the walk through scanner, he reached to take his things from the conveyor and walked away at a brisk pace. Happy to finally escape the torment of being in a queue (I really hate the feeling of staying in line), I went through the scanner right after him, but when I looked to my left on the conveyor, my phone was gone.

I was facing a world class mystery. One minute ago, my phone was in my safe possession. Then I put it on the conveyor for a few seconds and now it was gone. I couldn’t really wrap my head around what it could have happened. I was freaking out. On one side, because the thought of losing all the information stored on it was scary. All my contacts, all my photos, gone. On the other side, ALL my money was gone. How? Well, at that time I was using a “life hack” to keep my money safe. Basically, I had them tucked in between my phone and my phone case. So yeah, it was bad.

All of a sudden, flash images of the priest went before my eyes. I thought: “What if he was so hurried that he took my phone along with his stuff? People make honest mistakes. It happens. The mature thing to do is go and talk to him and get back what’s mine.”

Easier said than done. By the time I snapped out of my trance, the priest was gone from my visual field. “He must be inside”, whispered my internal voice. I climbed the stairs by jumping over two steps at a time but when I opened the big wooden doors, a big mass of people appeared. It was overwhelming. My priest was nowhere to be found. I didn’t know what else to do, so I took a step back and started to scan the crowd. It was like one big game of Where’s Waldo? and as much as it hurts my pride to admit it, I’m usually bad at this.

Staying in one place wasn’t working. People kept moving in all directions and my head was spinning. The church was pretty big and it had three parallel corridors. I decided to choose the middle one and walk on it towards the altar, but after I took just a few steps forward, my eyes drifted to the far right of the church. There was a confessional and my priest was walking towards it.

Shortly after I saw him, he looked around. He seemed to be searching for something. Or someone. His eyes brushed over me and then quickly returned to look at me dead in my eyes for a couple of seconds.Then, with a brisk move, he turned around, continued to move towards the confessional and went inside, in the spot reserved for the penitent (or so I assumed, but there are chances I was wrong).

In that moment, questions rose up in my head. Why did he look back? Why did he stop to look at me? Why did he look at me like THAT? Why did I had the feeling that he was running away? Was he searching for a safe space by getting in the confessional? Probably. It sure looked like it. Now what?

I had two options. First one was to go after him. Yes. For a second I didn’t care that we were in a church or that he was in the presence of another priest. For a second I was ready to fight for my justice no matter what, but after the first step forward I got cold feet. What I was planning to do was basically assault. I realized that there is a possibility to be wrong and that there might be another way to act in that situation.

Just like that, I changed my mind and quickly started to analyse the second option. Like I said in the beginning, the church had a good security system. Even though I didn’t notice it at first, I was sure that there had to be a surveillance camera at the gate. So I thought: Maybe I could explain the situation to the security guy, ask to get access to the video footage and solve the mystery once and for all. I didn’t know exactly what I would do after, but I was sure I would figure it out when the time comes. One step at the time.

In less than a minute I was back outside, standing in front of a man with big muscles and deep wrinkles on his forehead, from all the frowning that his job demanded in order to look fierce enough. Ready for the possibility to be yelled at, I activated my puppy eyes and I was ready to ask for a big big favor. All I managed to say was “Excuse me sir, I lost my phone, could you…” and his eyes grew bigger, his mouth twitched, like he wanted to say something but changed his mind at the last moment. He stopped me with a gesture, turned around and grabbed something from a plastic container box. “Is this yours?” he asked with a smile.

Was that mine? Was THAT MINE? Yes. Yes, it was. My phone was right there, in his hand. With its sparkly phone case, reflecting the sunlight in the most beautiful way possible. Do you know those romantic movies when the boy sees the girl and she is unrealistically glowing and everything is moving in slow motion? That was basically what was happening to me.

I asked the security guard how did the disappearance happen and he explained that he found the phone on the ground, after probably falling through the rollers of the conveyor.

As soon as I had the phone back in my possession, the thoughts of what it might have gone wrong if I chose to act in a different way, hit me. I mean, I was so close to go after a priest in a church, probably interrupt a confession and confront and accuse a man of something he didn’t do.

Looking back, I realized that all the details that seemed to incriminate him were just figments of my own imagination. Or should I say paranoia? For example, when the priest looked back and stopped to look at me, that was probably because I was the one staring him down first. Imagine throwing a quick glance at a crowd and suddenly see someone standing still and fixating you like a psychopath. Yeah. The fact that he turned around and sought shelter started to make sense.

The moral of this story is simple. As scary as a situation may be, don’t haste to make assumptions and don’t act immediately upon them. Travelling isn’t always a worry-free experience. It isn’t always just laughs, sunshine and rainbows. Travel will sometimes put you in harsh real life situations, but will also broaden your horizons and teach you lessons, like it did with me. And don’t worry if you keep repeating mistakes. That’s also me. Sometimes. A lot of times actually. If you’re like that… Well, good luck!

Now I’m curious: Did something similar ever happen to you? Even if not, let’s have a laugh together, I’d love to hear the funniest story from your travels! Also, if anybody knows churches in Rome with that type of security system, tell me their names and I’ll Google them. It would be awesome if y’all could help me identify the place where all this madness happened. Start sharing everything in the comments section below!

And that it’s what I call a story to be told. I don’t know why it sounds so natural to me, hearing it from you. :)))

Hahahaha I dont know, maybe because I always get in trouble somehow? :))

🌍 Hi, I'm Elena! Get inspiration for your next trip and let's start an adventure!
👇 Read this week 👇